Religious Orders but Not Nuns 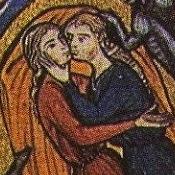 There is a long association of women-run girls's schools with homosocial bonding (among both students and faculty) that often shades over into romance. Although this article isn't examining the romantic potential of Mary Ward's organization, there are some interesting symbolic parallels in the "closeted" nature of their work in 17th c England as a Catholic organization.

Gallagher, Lowell. “Mary Ward’s ‘Jesuitresses’ and the Construction of a Typological Community”

This article looks at the women’s religious educational communities founded in the early 17th century by Mary Ward, the School of Blessed Mary. As an English woman setting up Catholic institutions during a period when Catholicism was out of favor in England, and as a woman becoming a prominent religious leader in the Catholic Church at a time when women were not encouraged to take leadership positions, the hierarchies of both sides found Mary Ward problematic.

Part of the focus of the authorities’ objections to Ward’s communities were their focus on the education of girls, aiming for a broad liberal education more traditionally associated with men, as well as traditionally feminine skills relevant to household management. Ward’s female-organized institutions were self-governing, electing their leaders internally and answerable only directly to the pope. (A structure set up with papal approval.) This set them in contrast with the usual model for female religious orders, which put them under local episcopal authority. Despite modeling her institution on existing religious communities, in particular the Jesuits, Ward’s schools were specifically not religious orders, neither maintaining the cloistered life nor adopting a religious habit.

In England the risk of official persecution led to practices of integrating into the fabric of society rather than standing out as an identifiable religious group. Teachers might live in the households of their students, or find Protestant patrons and protectors. Ward’s schools and teachers were often highly mobile to avoid trouble, but this very free mobility, and living within secular society, was part of what annoyed the Catholic establishment. Teachers might adopt the appearance of a variety of classes, moving between the clothing and habits of working class women and more elite women as it suited their needs.

Both Catholic and Protestant leaders were disturbed by the reputation Ward’s institution had for encouraging women to engage in public preaching and to hold opinions in matters of conscience. Though fairly conventional and orthodox in her religious opinions, Ward’s institution was clearly feminist and its approach and in its goals of making women equal in intellectual fields.